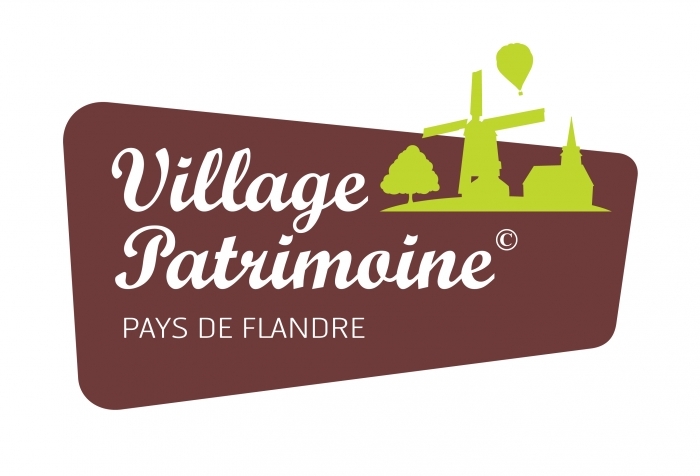 The villages with the Village Patrimoine© label are committed to presenting and preserving their rich heritage and architecture as well as the quality environment that surrounds them. The Hauts de Flandre currently has 7 Villages Patrimoine© but the network includes 20 villages in French Flanders.

You can visit them independently thanks to the leaflets available in the tourist information offices or by downloading them below. Guided tours with village guides are also possible.

Do not hesitate any longer, discover these typical villages of Flanders!

A town of 1,300 inhabitants, Brouckerque extends over 1,198 hectares in Flanders Maritime. Territory marked by water, it was marshy for a long time, which earned it its name which means “the marsh church” (brouck = “marsh” and kerk = “church”). Brouckerque is a village that represents this specificity of the polders. This territory, whose altitude is close to sea level, has been reclaimed over the centuries from the Aa delta, by a system for draining the marshes: the wateringue network. It is this network that defines the municipal boundaries of Brouckerque.

From the car park located behind the town hall, crisscross the 7 km of the circuit. Download the leaflet Village Patrimoine of Brouckerque

Crossed by the Yser, Esquelbecq seduces with its heritage, its dynamism, its intense cultural life and its declared tourist desire. Its name has been mentioned since the Middle Ages, on the occasion of the death in the town of Saint-Folquin, bishop of Thérouanne. Delimited by a Roman road to the west which constitutes the municipal boundary with Zegerscappel, Esquelbecq is a village which has experienced significant industrial activity; already evident in the past (brasserie, linen scutching, tile factories, etc.), this was reinforced with the establishment of the station. This also had an effect on the configuration of the town, since the urbanization took place near this same station. Place Bergerot restores the Flemish atmosphere and reveals, through the old residences and the traditional habitat, the charm of yesteryear.

Village of Flanders of 1600 inhabitants located at the limit of maritime Flanders and Inner Flanders, stretches between the Lille-Dunkirk motorway and the Belgian border. This route invites the walker to discover its history through the altarpieces and the classified furniture in the church, the chapels and the oratories, the restored houses in shimmering colors and the organs of Mortier which deserve attention. The village enjoyed part of its prosperity in the 20th century thanks to the production of bricks.

3.3 km route starting from the car park at the Place of Herzeele.  Download the leaflet Village Patrimoine of Herzeele 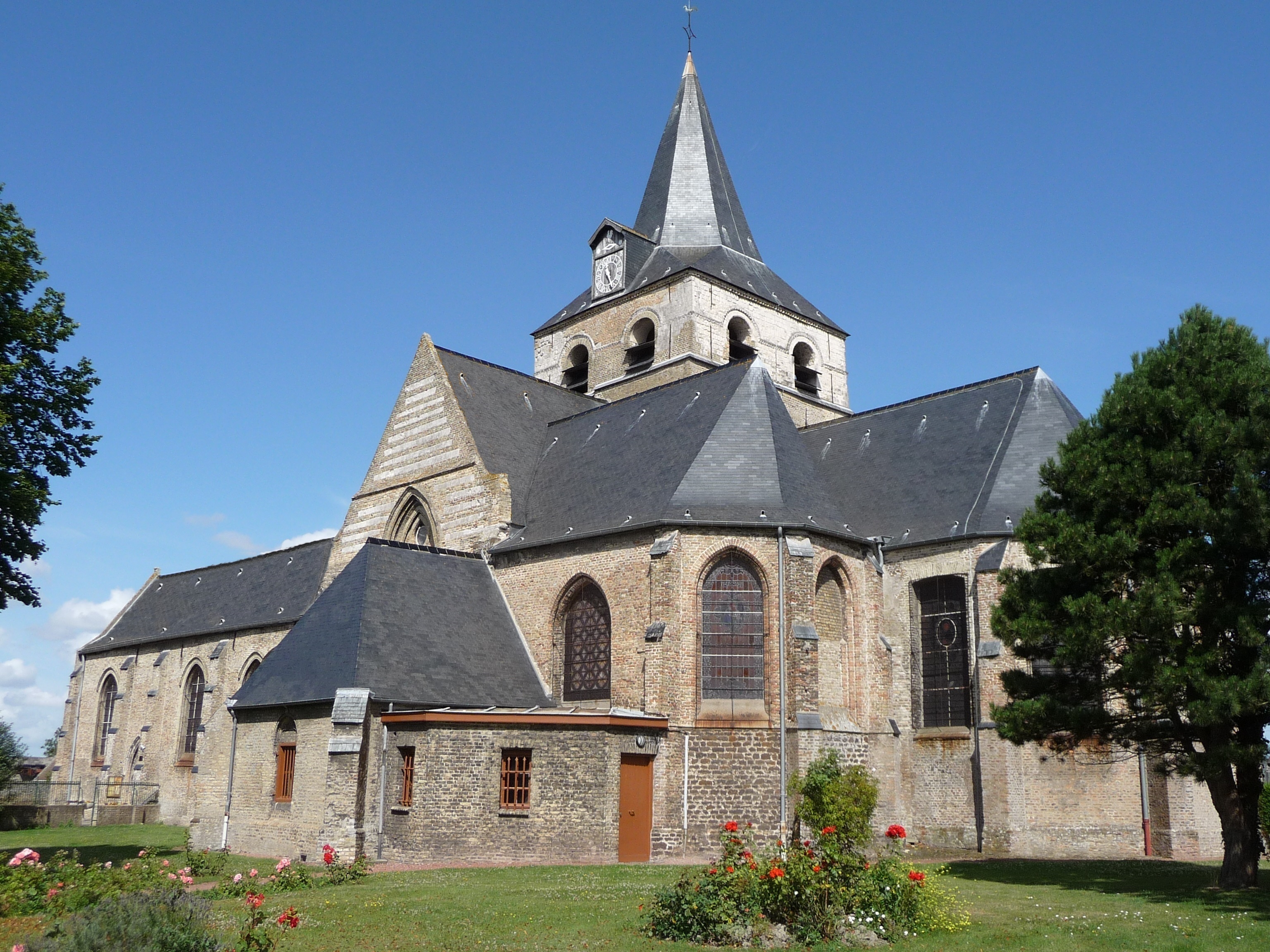 This municipality is characterized both by its constructions and by its particular physiognomy, with a huge square that gives the feeling of being in a much larger municipality. The pond there gave its name to the village. Pitgam is also a 12th century church and a mill, the Den Leeuw windmill , still able to make flour two centuries after its construction!

Come and take the 2.6 km circuit starting from the parking lot. Download the leaflet Village Patrimoine of Pitgam 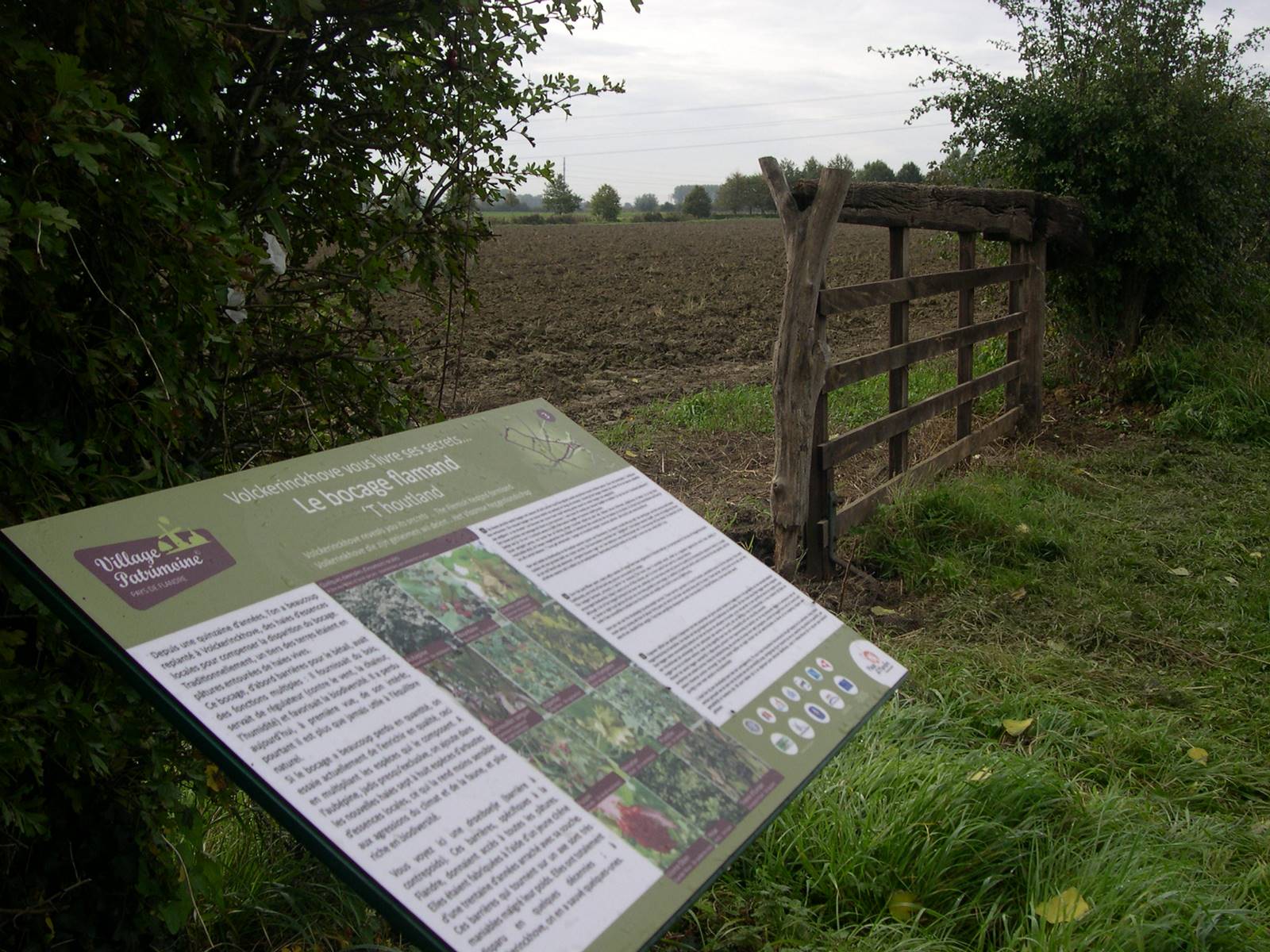 The village of 500 inhabitants is in Houtland (woodland), formerly bo cager and wooded, but whose landscapes have been greatly altered by modern farming practices. However, the village was a forerunner in the preservation of its landscape and architectural heritage, in particular by the reintroduction of country hedges or in the reconstruction of a unique model of "rosse mulle" (horse mill), numerous in the past but completely disappeared today. today.

Come and follow the 5.5 km route and discover, starting from the intersection of the old station and the Yserhouck Weg.  Download the leaflet Village Patrimoine of Volckerinckhove 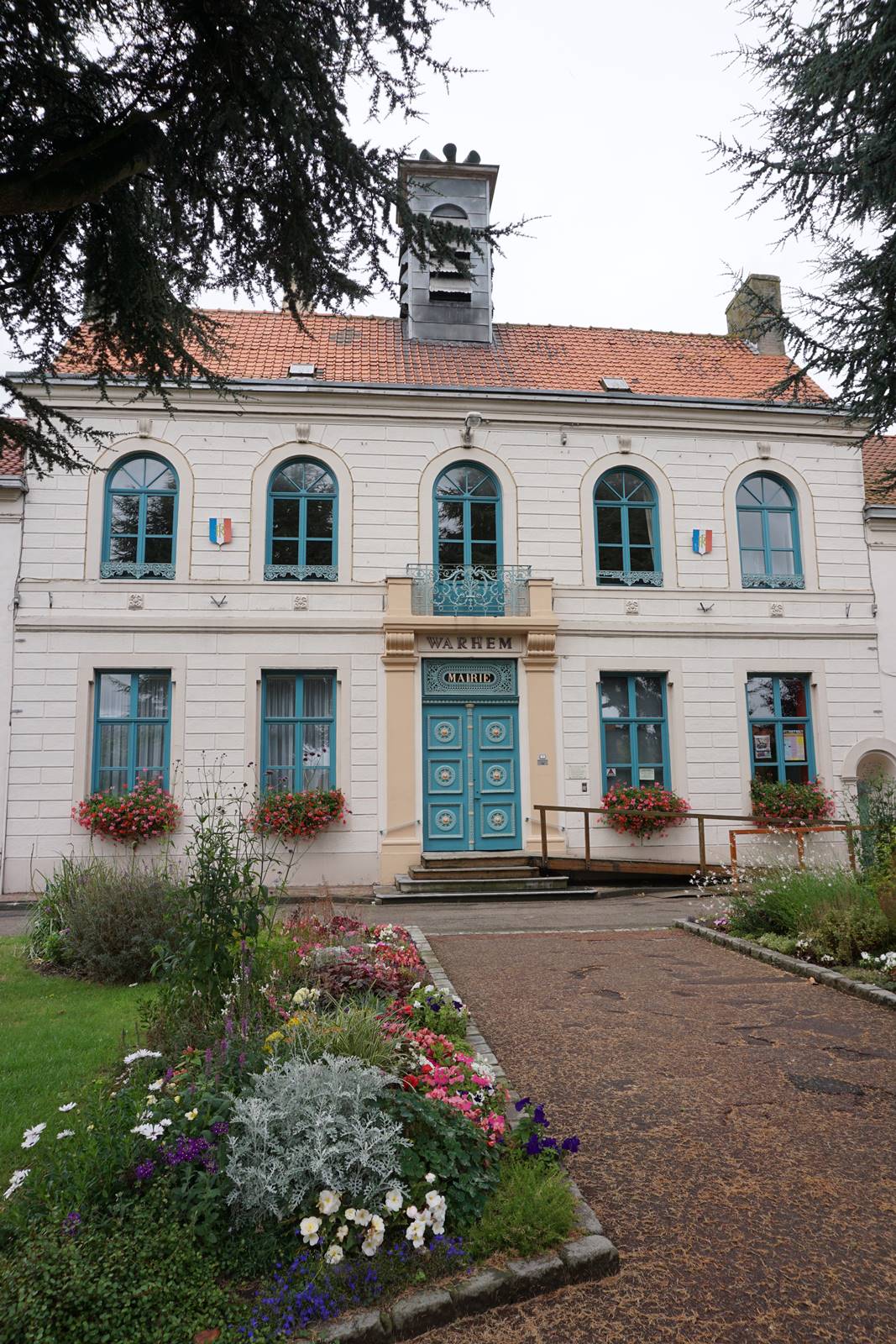 The village of Warhem is located in the sparsely wooded land of Blootland (bare country) in Flanders Maritime, between Bergues and Hondschoote. The ground has a downward slope from an altitude of 22 m near West-Cappel, to 0 m in the Petites Moëres. At the limit of Maritime and Interior Flanders, Warhem owes its charm to the old buildings and houses grouped around the church. Its giant perpetuates the memory of Jan Dequidt who, in 1722, introduced the potato to Flanders, long before Parmentier. The annual production of this tuber, in the commune, varies from 18,000 t to 20,000 t depending on the year. 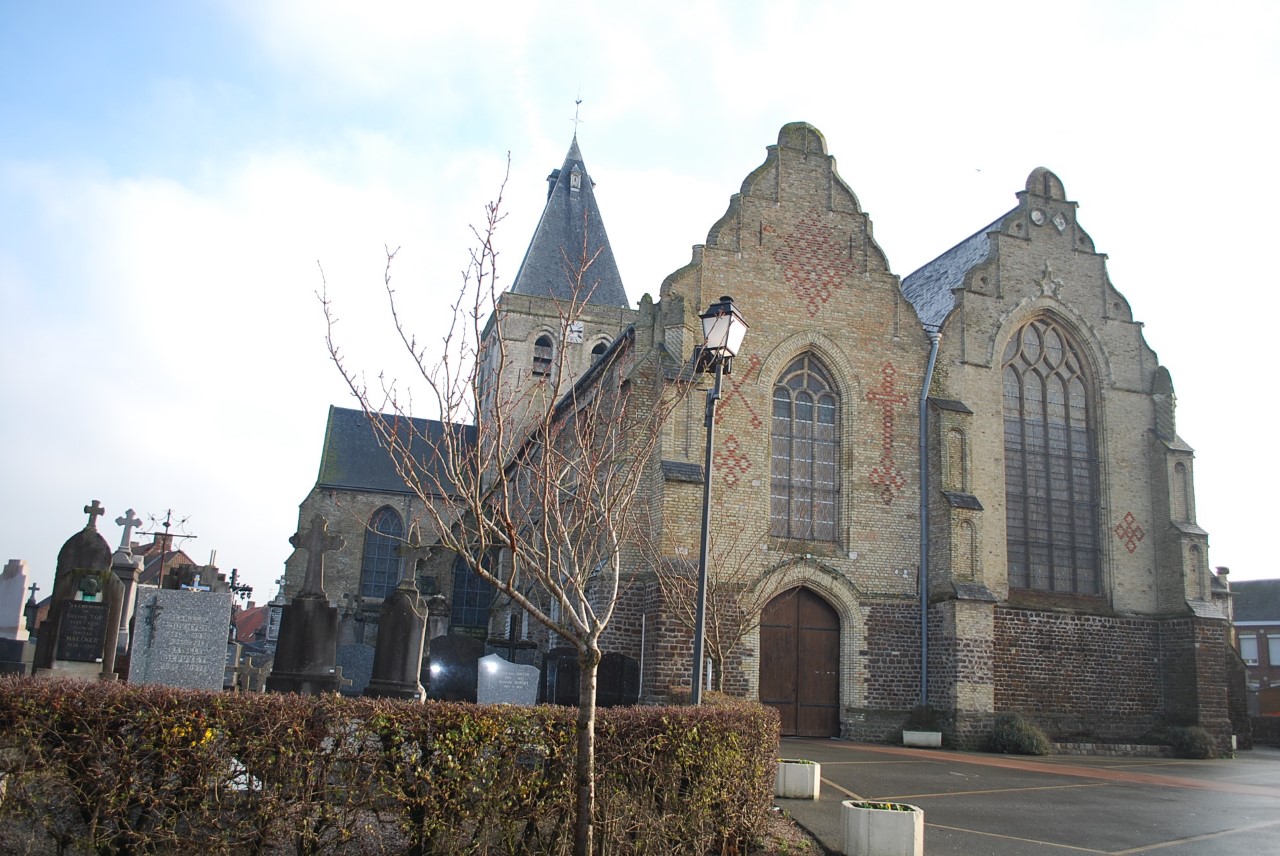 At the turn of its streets, Zegerscappel will transport you to the last century, when wheelwrights, carpenters, brewers, linen cutters forged the soul and the decor of this country where it is good to live, stroll and have fun. At the end of the 19th century, the privileged location of Zegerscappel allowed it to have eight mills.

If the trades have disappeared, the traces of these industries and crafts are present in the heart of the village: facades of old breweries, flour mills, old electrical factory, ovens... and the old station, witness of the passage of the little train of Flanders.

This 1.6 km route starts from the car park in front of the church. Download the leaflet Village Patrimoine of Zegerscappel