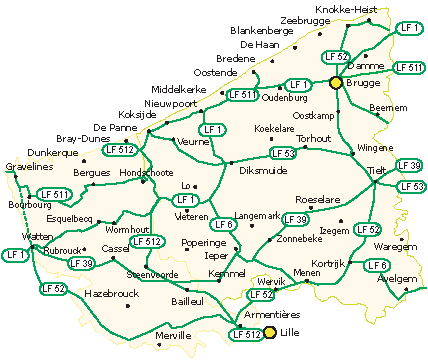 This international great cycling trail (470 km - 270 miles) starts at Den Helder (NL) and finishes at Boulogne-sur-mer (FR), or vice-versa. It follows mainly Bike paths or quiet countryside roads, goes through the most beautiful sceneries and connects a number of interesting places in the coastal zone and in the Inlands.

In West Flanders, the road is somewhat away from the sea, following the Middle Ages marshlands line. Through dikes and towpaths along canals and rivers, it meanders through the flat polders country of Flanders.

In France, the route avoids the hustle and bustle of Dunkerque and Calais and crosses at some distance from the coast, the green region of the Houtland, the hills of Artois and the landscape of gentle slopes cut with hedges of Boulogne. It reaches finally the Chalky coast near Boulogne-sur-Mer.

- From Watten to Boulogne sur Mer