All the photos illustrating this article are to be found at the bottom of the page, click on them to enlarge them

"Dédé l'archer" (Dédé The archer) was born in 2013, manufactured by Mr. TRICART from the STRAZEELE Giants' workshop. He is the giant of the Archers of the North of France. The Union of Archers Associations of the North of France was then presided by André TRAMCOURT, and between André and Dédé, there is like a knowing wink. The UAANF has entrusted the custody of this symbol, an archer dressed in a traditional costume to the House of Archers at Watten, whose ceiling height can accommodate its 4.50 m in height, not to mention the stretched bow at the end of the arm.

"Dede the archer" is a giant who can be pushed or carried. You can admire it at the Archers House at Watten, and visit, at the same time, this museum dedicated to archery on vertical pole.

The king of baker’s boys and the giants of Wormhout

In 1929, two associations of Wormhout embarked in comedy theatrical performance and had the idea of making a giant. It was in 1930, that Alfred CHRISTIAN realized this giant "Cochu": he was moustachioed, a beret on the head, staff of authority in hand and the keen eye in his white tunic. In 1932, was created "Mélanie", his wife.

Unfortunately, a year later, he disappeared from the world of giants.

It was in 1933 that was created "le Roi des Mitrons" The King of baker’s boys. It represents a baker-confectioner with 4 meters heights and weights approximately 90kg (198.416 lbs), it was carried by two people, for nearly twenty years, before being placed on a base with wheels. The creation of the association Friends of Giants and heritage of Wormhout “Les Amis des géants et du Patrimoine Wormhoutois” allowed the family to grow. Thus the first child "Michel'Tje" (little Michel in Flemish) came into the world, in 1990, with the feature of a fisherman; followed by his sister "Josephine" in 1991, carried giant, this elegant girl weights nearly 30 kg (66 lbs).

Following the dissolution of the association, the six giants were transferred to the City of Wormhout. The two kings go out during the carnival on the 3rd Sunday after Mardi Gras. Le Roi des Mitrons is the ambassador of the city of Wormhout.

Was originally carried by two persons

It should be pointed out that at the time when Alphonse de Lamartine was elected Deputy of Bergues, only the richest and the bourgeois could vote ; this right being reserved for taxpayers paying a minimum of taxes.

In 1913, the city of Bergues organized big celebrations to commemorate the 80th anniversary of the election of Lamartine as deputy of Bergues. On this occasion, a new giant was built and called “L’Electeur de Lamartine” the Elector of Lamartine and that's why he is dressed as a "bourgeois" at that time. He is dressed in a frock coat, wearing a top hat and accompanied by a large black umbrella (also called a "berguenard")

At each beautiful season, the giant sits on Bergues Square, near the Town Hall and peacefully watches over the beautiful city and has its photograph taken by many visitors.

The idea of making a giant to represent the regional potato sector was born in February 2005. This potato variety was born in 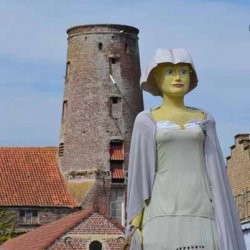 1905 in the Netherlands. Its name comes from its creator Louis de VRIES, teacher and gardener who counted among his students a blonde and deliciously beautiful girl, nicknamed "Bintje". Even today, it is the most cultivated variety in the Nord Pas-de-Calais region. Its skin and flesh are yellow. It withstands cooking and preservation. Hence the idea of marking the centenary of this potato by creating “MADAME BINTJE” Mrs Bintje.

A potato blossom depicting hat, tinted clothes, and an attractive chest do the charm of this giant. Giant 3.80 m height and 60 kg (132.28 lbs.), it has 1.50 m diameter on the ground, it is carried by 1 carrier. On September 2, 2006 on the fairground of Karyole Feest was born Mrs. BINTJE, whose creation was entrusted to people in condition of professional integration. It belongs today to the Community of Communes of the Hauts de Flandre and to the Regional Association for the Promotion of Potatoes. It goes out traditionally at Hondschoote, during the Karyole Feest festival and leads the procession.

In 2016, for the 10th anniversary of Mrs Bintje, more than 40 giant came to celebrate. Do not miss the Karyole Feest festival and Mrs Bintje outing, the 1st and 2nd September 2018, at Hondschoote.

More information about the Karyole Feest on the official festival website

Created by the Groenberg's Baladins in 2014, it represents a halberdier of his Majesty King Philip II of Spain, at the time the Spanish ruled in Flanders (16th century). It wears a red and black uniform, a feathered helmet and a cuirass. It holds its halberd with one hand and a pair of Bergues sausages in the other. It is 5m30 (16.40 feet) tall and weighs 134 kilos (295.42 lbs).

Created in 1987, to recall the "Inventor" of the potato, Jean PATATE is a movable non-carried on wheeled chassis. Made of moulded plastic, metal frame, PVC, plaster strips, wicker and fabric, it is 4 meters high (13.12 foot).

It is dressed in a black dress and a white shirt with a blue vest on it. It wears a black hat and a red scarf around his neck.

It holds on his left arm a "kansel", a small wicker basket with a handle, with the city of Warhem coat of arms on it.

It goes out during the fairs and the ceremonies of the town and outside the town, on invitation.