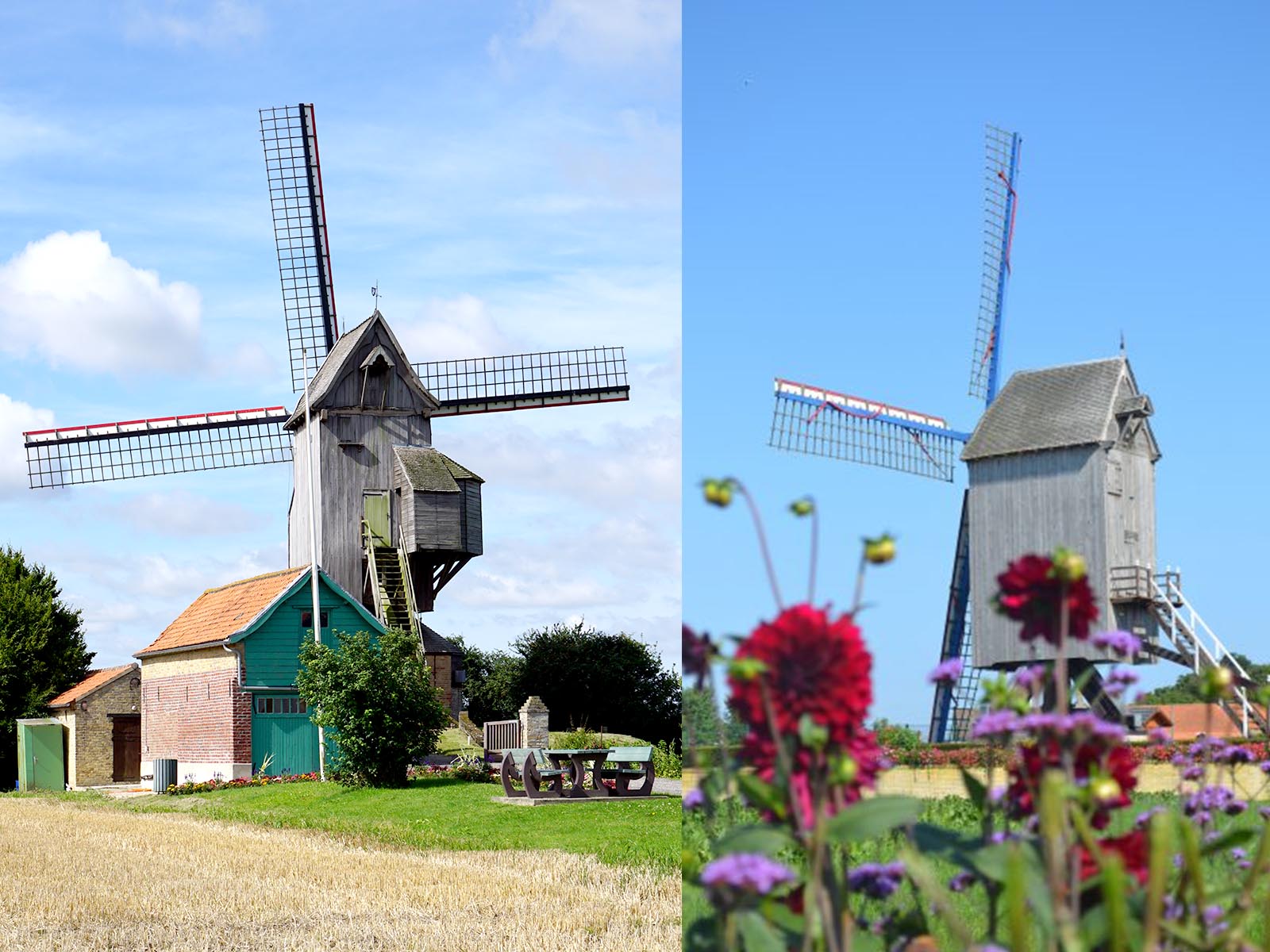 The SPINNEWYN mill, or the Victory Mill, erected in 1993 in memory of the constables who took part in the Battle of Hondschoote (1793).

In September 1793, an Anglo-Hanoverian coalition wants to invade Republican France to reinstate the monarchy. To do this, English troops besiege Dunkirk. Called to the rescue, the French army led by General Houchard valiantly repels a Hanoverian offensive on the territory of Hondschoote. The decisive assault is carried at the base of a mill, the SPINNEWYN mill, by the men of the 32nd division of constables who saves France from the invasion.

A century later, the SPINNEWYN mill threatening to fall is destroyed. To celebrate the bicentenary of the Battle of Hondschoote, it was decided in the early 1990s to rebuild the mill of where the Constables distinguished themselves. The SPINNEWYN windmill is a post mill. Inside, a set of millstones ensures the production of flour, exclusively at local festivals.

The Noordmeulen post Mill (Mill of the North) is considered as one of the oldest mills in Europe. It bears on one of its beams the date of 1127. The Noordmeulen Mill belonged to the HORNES family until it is bought by the DANES family in 1717. Since then the millers have engraved their names on the 1127’s dated beam.

An order from Lille’s Bureau for finance in 1773 forbade the construction or installation of a windmill within 250 feet of the road, as the sound of the windmill sails frightened horses and cattle. Located on the other side of the road, it is therefore moved to its current location.

In 1888, the new owner noticed its very bad state; he adds a pair of millstones on the first floor and the sifting area on the right side. The latter contains an octagonal sieve which is covered with silk gauze and a different weave to separate fine flour from the oatmeal and finally the bran.

It is the last miller, Eugène VERCRUYCE, who by restoring and maintaining, saves the mill. He substituted iron sails for the wooden ones, the post, riddled with bullets during the battle of 1793 by the one of the Briarde windmill at Wormhout. When he died in 1963, his two daughters inherited it. One of them, Thérèse, is strongly involved, and preserve the memory of her predecessors. But the task is difficult, the mill, in very bad condition, risks collapsing. In 1980, one of his sails falls in the neighbouring field.

In January 1982, the city of Hondschoote buys and restores it in two stages. The first in 1985, a new roof and a new siding for the body were realised, its old structure is reinforced and a new slope dug around it. The second in 1987-1988 where sails were put back. It was inaugurated in the spring of 1988, chaired by Maurice SCHUMAN (Senator and member of the French Academy), surrounded by personalities, Mesdemoiselles VERCRUYCE and a descendant of the DANES family.

On one of the wooden pieces of the mill, we can read a motto meaning: "Strength is good. Genius is better. "